Strelok and Titus are exhausted after 10+ hours of work on the DS419 systems. The Sante Fe is maneuvered 20km distant where the team rests and recuperates. The weapon mounts are removed from the hull and everything stowed for re-entry before returning to the satellite for one last look.

Before attempting to destroy the satellite using it’s own swarmbots, Strelok EVA’s over to the satellite for a last look through the spy cameras. While doing this it becomes apparent that Daedalus Starship Control Computer has gained control of all the satellite systems and is allowing Strelok to orient cameras and comm-beams as desired. The DS419 AI has been pushed to the margins, but is still preventing direct communication with the Daedalus.

The team comes up with a plan to present messages to Daedalus via hand-written cards placed in front of the spy cameras. Sleestak goes eva with the cards while the rest of the team watches from the shuttle flight deck 30 meters away. Titus watches for any tell-tale electronic signals on the bridge.

Daedalus is indeed able to read the cards through the satellite cameras. A flashing status light appears in the satellite access conduit. Strelok routes this to the shuttle using the swarmbot network, where Titus confirms the sequence of flashes are ancient code (morse code). Communications are clumsy and slow using the flash-cards and blinking lights, but yield valuable information. The team gets quick answers to a list of yes/no questions, then a longer response to the more open-ended query, ‘Who is aboard the Daedalus’:

“An unknown species boarded the Daedalus 42 years after the end of world war 3. We are pleased to hear from surviving sapient descendants of the human race, though we will all soon be extinct unless we can work together against those who destroy our children.”

The reference to ‘children’ is odd. Does the SCC know about the giant drones spraying human sterilization agents across the planet? The team asks if the SCC knows about events on earth since world war 3:

“No. Until you provided us access to this satellite, we were isolated and unable to influence events beyond the Daedalus. Will you help us?”

Sleestak writes out ‘YES’. But the Daedalus never responds. The laser communication beam remains fixed on the distant starship and the comms terminal still reads ‘datalink / medium-volume feed’. SCC appears to still be in control of the satellite, but has gone quiet. More interference from the DS419 AI, or other unknown agencies?

Odd that the SCC consistently referred to itself in first person plural, or perhaps there is a crew still on the Daedalus after 250 years? This seems unlikely unless they remained in hypersleep for centuries. But given the strange black ship seen attached to the modified shuttle dock, its anyone’s guess who or what is aboard the giant starship.

The STOSS approaches its 3rd orbit over the Utah region. Just then the flight deck crew sees a flash from earth’s surface. Strelok hurriedly inspects the albukerke spaceport through the 120x spy cameras, fearing the worst. A mushroom cloud is rising from the spaceport…a tactical nuke of some sort. The garage and control tower both disappear beneath a widening shock-wave. Could the long arm of the Mormons extend this far from Utah? Or for some reason the hissers detonated their hidden ‘fire-egg of the ancients’? Either way, a great deal of artifacts and equipment, including the APC, must now be considered lost along with Jason-7 and the spaceport ruins. Did Gyorj and Mr.T escape?

A pale and shaken Titus informs the group that a landing at the spaceport area, or anywhere else that can be reached from this orbit, will now be quite perilous. Also a one-way trip, since the necessary recovery and launch facilities won’t be available. The other known STOSS facilities are all submerged beneath encroaching oceans (or subsiding coastlines, it’s not clear which).

Strelok notices the SCC reorient one of the communication beams toward the shuttle. The shuttle computer receives re-entry parameters for a landing at the swamp location 2500km east of Utah, now identied as ‘Ares Base’ in the shuttle communications console. This location is clearly visible through the spy cameras: a small surface facility in the middle of a watery region overgrown with vegetation (a swamp and/or jungle…something unfamiliar to these desert dwellers). At least four intact structures are visible from GSO. There is no evidence of roads, ruins or other large man-made artifacts within 100 kilometers of the base.

Another smaller flash appears, about 15 minutes after the blast that destroyed the spaceport. Strelok verifies the new explosion occurred over the hisser fortress on the east side of the Albukerke city ruins. Other than smoke and a few fires, there seems to be no major damage. No mushroom cloud is in evidence. The nuetron bomb left back in the VTOL? Mormon operatives or spies?

It seems that the Daedalus ‘Starship Control Computer’ is advising a landing at ‘Ares Base’. The re-entry and landing should be safe given the precise instructions just provided, but what about the base itself? The team decides its time to leave orbit. Hopefully this long-lost base is a secret STOSS backup facility. Unfortunately the Daedalus SCC is no longer able to confirm. Before returning to the shuttle, Strelok makes sure the communication beams are oriented as follows:

All but two of the swarmbots are left with the Daedalus-controlled satellite.

Swan Song of the Sante Fe 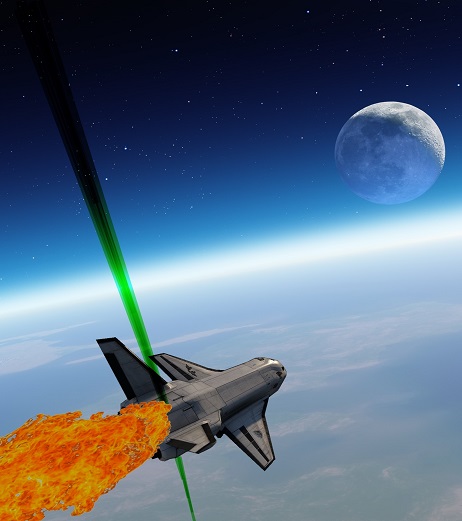 The Sante Fe starts it’s descent from 36,000km, a process which will require almost six hours. The anti-gravity generators begin working at full power to slow the shuttle from 11000kph and precipitate the fall from orbit. Five hours later the hull is oriented backwards and plasma vented through the main thruster to quickly reduce velocity below 4000kph (~2g deceleration), using up 90% of the remaining proton-boron fuel. Just enough remains to energize the anti-gravity generators for a controlled landing. Ten minutes later the shuttle is pointed back toward earth. At 90km altitude the upper atmosphere begins to roar past the hull.

Just as velocity drops below 3000kph, a blip briefly flashes across the radar display, 5km above and behind the shuttle. Seconds later the camera providing a view over the rear shows a beam of glowing green plasma cutting into the engine compartment from above. The beam lances forward across the length of the main cargo hold toward the crew module. Every light in the flight deck goes from green to red in the blink of an eye. The screen flares white as the fusion plant explodes into a balloon of expanding plasma. Simultaneously the CMJ solid rocket booster flings the crew module away from the disintegrating shuttle and toward the earth at over 3000kph.

A loud THUMP indicates the 10-meter telescoping stabilizer has deployed behind the crew module. This keeps the flying brick oriented forward, something like a giant lawn dart. The expanding balloon of plasma that was the shuttle is still visible in the rear camera display…no pursuit is apparent. Superheated air screams over duralloy as the crew module plummets through dense clouds. The buffeting is tremendous…like being pushed down a mountain of cinderblocks in a shopping cart. Everyone takes a severe beating.

Three giant parachutes deploy with a WHUMP, delivering a savage jolt to six erstwhile astronauts. The silent crew module swings back and forth in long lazy arcs for several minutes before becoming relatively still. Only a thick gray mist is visible beyond the view ports. Thirty seconds later the module smashes into something that gives way with a loud crack, then plows through soft ground. A wave of water and mud splashes across the view ports as the crew module comes to rest upside down and tilted at a 45-degree angle. Luckily the hatch on the starboard side doesn’t appear to be blocked. The instruments are still functioning on backup power from the atomic cells. According to the last available navigation data, ‘Ares Base’ is 50-100km distant and 350-30 degrees from this location…a very wide margin of error.

It appears to be light outside, but the view ports are still covered with muck and mud. Through the view port in the rear cargo bay hatch, now welded shut, the team glimpses a watery landscape packed with huge trees and plants of all shapes and sizes. Moss and vines hang down in long streamers. The sky is obscured by heavy clouds.

Humongous drops from his acceleration couch to the ceiling and checks the cargo. He informs Bannstone that the pet goat he stowed away is now a meat-sack. Gooptaz works his culinary magic with the sad remains of ‘Bessie’ (or whatever its name was). Everyone is feeling the effects of the brutal re-entry and earth gravity. The team spends 8 hours resting and recuperating, taking stock of their equipment, and preparing to ‘eva’ into a green and watery world possibly more alien than space. Unfortunately no one was planning on an extended camping trip, so only ten days of food and water are left on board. Gooptaz rues the loss of a second set of tech-III cooking gear, probably nuked along with the spaceport.

With Mongo’s help the stuck main hatch is unjammed. Everyone remains in spacesuits or power armor while Gooptaz checks for poisons and radiation. The air is strange and rancid, heavy with the scent of water and biomass, but otherwise seems safe. Titus remains in his spacesuit as that’s the best armor available to him. Stak and Mongo don their power armor and climb out, followed by Bannstone, Gooptaz, Strelok and finally Titus.

The crew module has splashed down atop a small muddy island about 15 meters long and 7 meters wide, covered with green fronds and tall grass. Narrow channels of black water run between clumps of vegetation and clusters of dark tree trunks rising almost directly from the water. A dim watery light filters down through the tall canopy high overhead. The calls of strange creatures echo through the weird landscape of giant plants and water. 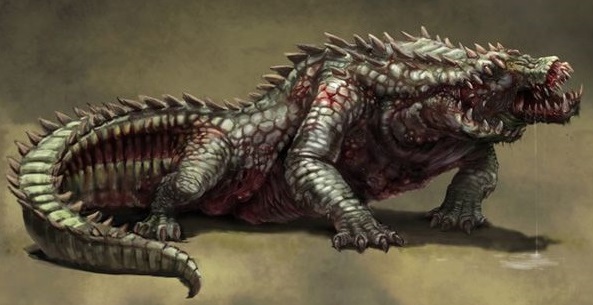 Sleestak and Mongo stride into the black water to test it’s depth…only 1-2 meters here. The heavy power armor sinks another 30cm into the muck. Three huge lizard-like beasts suddenly explode from the black water on three sides of the tiny island. These are giant mutated alligators over 6 meters long, something unknown to natives of central Utah.

There is no energy for the laser and blaster weapons, so bullets must be expended to take down the monstrous gators. Bio-energy beams from Gooptaz and Bannstone help avoid wasting too much ammo. But most of the heavy lifting is accomplished by Mongo, courtesy of the barbaric hand-forged greatsword he insisted on toting into orbit. Who knew? The huge combat-clone swings the primitive weapon in great arcs, hacking apart two of the reptiles almost single-handed. One of the gators catches Strelok and disables a mechanical leg. Luckily the damage is minor and easily repaired, as only a single set of spare robot parts is left. Titus gives his empty laser pistol to Strelok, who mounts it successfully on the gimbaled shoulder mount where it can draw energy from his internal atomic cell. Mongo and Gooptaz treat a few other minor wounds.

Sleestak and Mongo complete their circuit around the island and find nothing beyond endless channels of torpid black water meandering between clumps of tall trees, reeds and grasses. Gooptaz cuts 60kg of meat from the carcasses…gator meat for all! Titus and Strelok begin stripping the shuttle of everything usable, including radio equipment, flotation devices, cargo webbing, tubing and wiring, cameras, etc. The huge 60kg parachutes are pulled in from the swamp and piled nearby. Strelok and Titus begin making small tow-floats to transport the choicest gear away from the sad remains of the ancient orbiter.