From Frying Pan to Fire

I’m pleased to announce the arrival of a second group of post-apocalyptic survivors to the Utah wasteland! These lucky wasteland warriors are refugees from the recently-demised Indian Valley community, a group of isolated settlements high in the mountains east of Efram and Mount Pleasant. A horde of savage beast-men from the south, organized by some unknown agency, finally overwhelmed the string of tiny Tech-I settlements. Only the toughest and best prepared escaped, grabbing what they could before fleeing west through the mountains toward questionable refuge in a remote Shadow-Years ruin. These seven emerged from the deadly ruins beneath the mountains, to spy the far glint of solar panels atop a huge skyship hulk across the valley…the fabled settlement of Mount Pleasant.

Sessions 1 and 2 incorporate ‘The Crevice’ scenario and art from The Mutant Epoch RPG.
————————————————————————————————————————————————————-
Poorly armed and lightly equipped, seven mutants and humans thrown together by fate make their way into the mountains, leaving behind burning villages swarming with screaming beast-men in the valley below. Other small groups of refugees can be seen making the same trek. Six hours later the team achieves their goal by secret paths: an isolated surface facility high in the mountains, almost completely destroyed in the ancient war that ended Shadow Years civilization over a century ago. 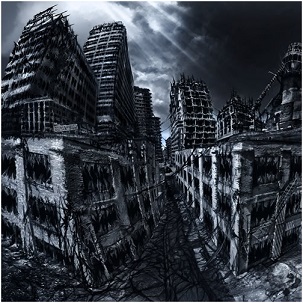 Several square kilometers of surface structures are pockmarked by huge craters from bombs or orbital energy beams. The team makes their way through the silent ruins hoping to find entrance into the network of subterranean spaces below. An hour later a thunderous crash is heard and felt as something knocks down a nearby concrete wall, followed by the approaching sound of sliding, shifting rubble. Something huge is moving closer! The team notices a recently-exposed crack in a nearby concrete wall and dives in for cover. The sound of a huge shape crunching back and forth through the rubble above continues for some time. Distant gunfire, explosions and screams are occasionally heard, but the creature or machine always returns to the area, apparently aware of the presence of living beings nearby.

The team decides to take their chances below and smashes their way though a twisted steel door. Beyond is a series of badly damaged passageways and chambers that seem to part of the administrative complex for a scientific research facility. The facility has never been entered from this side and no humanoid tracks are evident, but a few mutated insectoid creatures must be destroyed including a bizarre 2.5m long armor plated beetle projecting a stream of caustic larva-bearing acid from a long bony tube on its forehead. It appears that some sort of panicky firefight occurred here in the far distant past. Various doors are dented by fire-axes and walls are scarred by bullets, grenades, and impacts from some kind of heavy explosive projectile round.

One heavy steel security door is damaged by axes, grenades and steely claws or teeth, but still intact. The door is unpowered and jammed shut. Bannstone is able to use a metal strip to lift away the pair of wedged fire axes blocking the door from the other side. Beyond is a large control center. The curving sides of the chamber have collapsed inward exposing stone, rubble, twisted metal and pipes. On the far wall is a huge video screen and in front of this, a row of intact but unpowered computer terminals. The room is littered with chunks of ceiling material, overturned chairs, yellowed papers, file folders, metal coffee mugs and other junk. A half-dozen ancient skeletons are found in the detritus along with several valuable relics including a sealed case full of military rifle rounds in perfect condition.

The administrative area terminates in a reception lobby with elevator door. Amazingly the call button emits a soft bluish-glow. Gyorj pushes the button…a roar of grating metal and collapsing masonry is heard, then all at once the doors open from the center point with a snap. Concrete dust billows out into the lobby. Peering into the space with eyelights, Sleestak discovers a shaft filled with wires and pipes. The old elevator cables hang from a blockage someplace in the ruined structure above. The buckled elevator car rests in a cloud of dust at the bottom of the shaft eight meters below. Using Mr Tee’s grapnel+cable implant the team safely climbs down to the top of the elevator car. Humongous and Kranky use brute strength to pry open the twisted access panel.

Beyond the elevator car is a series of corridors and rooms dimly lit by red emergency lights. Signage reveals this to be ‘Research Facility 11 / Established 2585 / Union of Western States’. There is evidence of a desperate fight long ago against a seemingly non-human foe, though only human bones are found amid the ancient remains. The original personnel were mostly killed by crushing force and teeth or claws. A few appear to have committed suicide. The fresh bones of a number of humanoids, probably beast men, are found throughout the area, stripped clean of flesh but no more than a week old. Recent tracks of variously-sized bipedal but clearly non-human creatures cover the area. 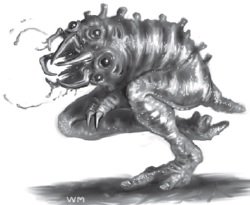 While investigating a partially collapsed storage room, a dozen or more meter-high mutants rush from the shadows hissing and squealing. These headless albino horrors run about on two legs seeking to attach their lamprey-like mouths to victims. They must be hacked apart one by one as the team possesses little in the way of advanced weaponry at this point. 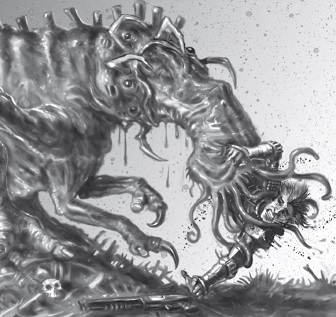 Three huge bellowing and howling specimens over 2 meters high are attracted by the noise and burst into a nearby break-room just as the team enters. The ‘gut exuders’ attack by belching forth their stomach through a 40cm tube-like maw to envelop and crush their victims. The natural weaponry and mutations of Sleestak, Gooptaz and Bannstone, and the huge strength of Humongous, saves the team, though several victims are partially ingested before being rescued. The team finds a few artifacts including a pistol, advanced radiation suit, and a crate containing a dozen new lab coats. Also the partially functional head of a reception-bot. Unfortunately no food or water is found.

Bannstone is able to guess the keypad code on a powered security door labelled ‘Facility 11 Engineering’. Inside is a welter of flame, smoke, sparking wires and glowing pipes. It seems that the facility power systems are on their last leg. A huge store of combustible fuel and liquid oxygen in remote tanks has been slowly leaking away and burning off in here, possibly for decades. Gyorj and Kranky break into a computer terminal and restore full lighting and power to the remaining intact spaces and undamaged computer terminals. It is also possible to shut down facility power, control ventilation and even overload the mini-fusion reactor, assuming the manual override controls are intact.

Across from the engineering space is a sagging door giving way to a large circular laboratory and elevated observation theater. Mr Tee and Humongous break into a large transparent containment chamber dominating the lab. A number of perfectly intact ancient skeletons wearing ballistic vests are visible inside. Residual poison gas flows out across the floor, but neither man is unaffected thanks to their super-human constitutions. Ballistic vests, Stage II access cards, gas masks, a number of pump-action shotguns, one SMG and one pistol are recovered, all in good or excellent condition. In this and other areas a few heavy blue-colored cartridges labelled ‘M76 RAP’ are found…these prove to be devastating gyrojet-propelled explosive projectiles when fired from a shotgun.