Campaign of the Month: December 2016

Gamma World 2754 has concluded. See the Adventure Log for a detailed accounting of our exploits.

Thanks to the many players who created this saga of the 28th century across 88 gaming sessions and 3+ years.

See you in the wasteland!

After twenty-five centuries of more-or-less upward progress, humanity somehow lost its way. None of the survivors scratching a living from the 28th century wasteland can say exactly where our ancestors went wrong, or why. One by one the nations of earth were pulled into a new global war, the Third ‘world war’. Shortly after the turn of the 26th century conventional conflict culminated in the apocalypse we had avoided for so long. Shining cities of duralloy towers and crystal domes fell into ruin as the conflagration spread like a cancer across the globe. The isolated survivors retreated beneath the tortured earth to embark upon a new Dark Age now known only as the ‘Shadow Years’.

The subterranean ‘Enclave’ societies of the 26th century picked up the pieces and made rapid technological progress, but experienced a sustained social and moral decline. Conflicts within and between the Enclave nations eventually brought about a Fourth World War in the 2nd decade of the 27th century. Moral pigmies ruling the scattered enclaves deployed world-destroying weapons and artificial horrors without restraint. The war trundled on after a second and final world-rending apocalypse, with perhaps no sane humans left in charge. For several decades a handful of madmen, sentient machines and created beings battled one another for supremacy of the withered earth. Finally the last machine ground to a halt and silence ruled the wasteland.

In the last decades of the 27th century a tiny remnant of humanity returned to the few relatively habitable areas of North America. The bulk of these survivors were small tribes of nomadic barbarians roaming the wasteland. After decades of toil a few semi-civilized sanctuaries appeared in the hellish landscape otherwise reduced to desert, rock and radioactive ash. In the Utah region at the middle of the 28th century the known civilized settlements include Vault 57, Gunson, Sipio, Efram, Mount Pleasant, Nephi, Spanish Fork, New Salt City, Magna Outpost and Brigtown. These tiny settlements cling to survival from month to month. Children are rare and the local population is increasing only due to an influx of refugees from less habitable areas. The abyss of total extinction looms close. Bizarre mutations, horrific monstrosities, incredible new powers, ancient technology and sentient survivors all exist side by side in this strange new world of the 28th century.

Will humanity lift itself by it’s bootstraps and once again toil up the ladder from barbarism, or is this the closing chapter in our history? Are the creations of mankind, spawn of the great research laboratories of the 25th and 26th centuries, our logical and inevitable successors? Why did the shining civilizations of earth self-destruct just as they embarked on the greatest adventure, the triumphant moment enabled by all the science, capital and culture amassed over millennia of struggle? These are the questions to be answered, but the unforgiving wasteland must be conquered before yielding its secrets. The first problem is survival, then power, then knowledge…if you can live that long.

Gamma World 2754 is a campaign of post-apocalyptic adventure based on a heavily modified and extended version of the original 2nd Edition ‘Gamma World’ rules published by TSR in 1983. PDFs of the original rules, new enhancements and rules modifications will be made available to players. In general the rules have been modernized and greatly expanded. * 2014 update: material from The Mutant Epoch rpg is finding it’s way into the mix.

1. A coherent story arc with distinct plot points, integrating hard sci-fi, survivalist, mystery, and horror elements. Spaghetti Westerns too…Ennio Morricone, anyone?
2. A retrofitted ‘Skill’ system allowing for improvement as ‘ranks’ are gained.
3. A limited critical hit system and semi-realistic weapon stats with the primary design goals of relative weapon balance and player survivability, while still introducing an element of realism not found in the original rules.
4. Over 90 new weapons and 500+ other items exist, spanning a range of technology from stone age through early 27th century (force fields, energy weapons, anti-gravity…). A few representative examples appear in the Items tab.
5. Campaign management and play are simplified through a suite of web apps created by the GM (in addition to the present ObsidianPortal web site, of course). Virtual tabletop software will be used to present maps to players, though a laptop is not required to play. Character sheets are in .xlsx format with formulas and can either be printed or managed on a laptop/tablet during play, as desired. 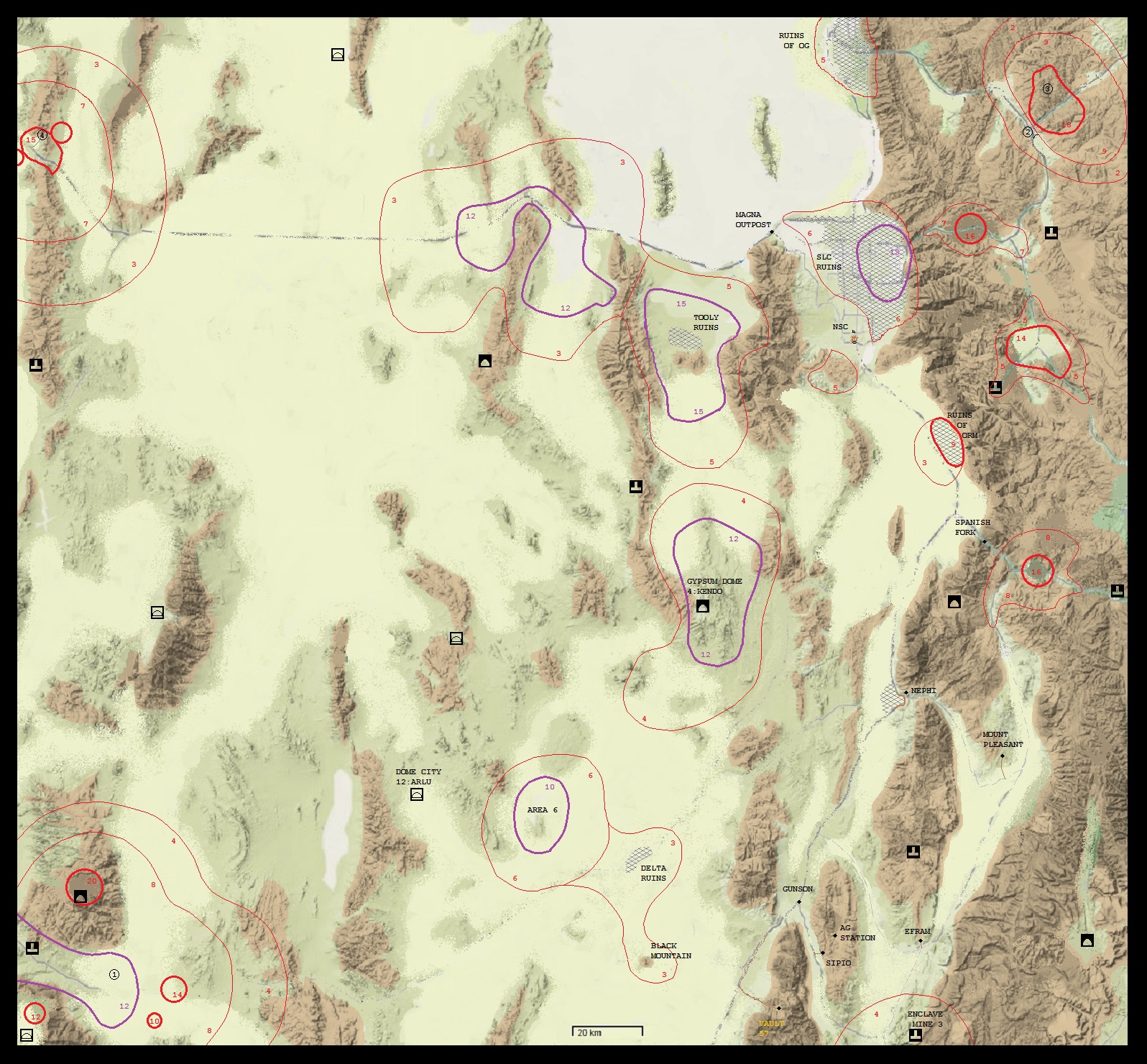 Congrats to all of you on your December COTM win. I gladly pass the COTM torch (aka nucleonic glow-strip) over you group.

Congratulations on winning CotM, Omegabase and pals. I think it’s always special to win the Christmas Time award so I hope you and yours are well happy with it all. The interview was great and it seems you have been having quite a roller coaster ride for quite some time!

Hi! I just wanted to let you know your campaign is / was awesome. I’d love to run a game in this milieu someday, a brief Gamma World / TMNT After the Bomb mash-up that I ran in 8th grade in 1989 is one of my most fondly remembered campaigns ever. Lotsa love for all the strangeness that is Gamma World! You do a fantastic job here with the character pages and the session write-ups and capture the crazy mutant apocalypse with genre-savvy panache. Real talk: if you ever run another Gamma World campaign over an online tabletop or play by post let me know!

I love the immersion I feel from this game, top notch making it “feel” real.

Wiggedy-wag-wog-WHAT?!?!?!?! Holy shit! I’m a Mormon! What does this mean? Can somebody tell me about my family? Do I have living relatives? What does it mean to be a Mormon? What does this eye and triangle sign mean? They “worship” something, some “God” like the Radiationists do, I’ve once heard whispered. What does that even mean? I gotta find that Odile Krenshaw and get some answers.

I’ve written the logs for a bunch of the EP sessions if you remember…it’s great fun.

I’d have done the last EP session already, but I missed most of it. Whoever writes that one up, be sure to include my amazing “00” psychotherapy skill check to covertly diagnose Alice Chu’s hidden PTSD! The first dice-roll for the new ‘season’ i might add.

Has anybody else noticed how awesome Will’s write up of the Sessions are? Way to go Will! I clearly need you to write up some session recaps for MY game again too. We’ve been missing out on telling the world about our exploits :-)

I hope they give us a table on the Main Floor today instead of in that side room. :-( I am psyched about getting out into the wasteland. I am JONESING to scavenge some Tech Level 3 and 4 gear. This caveman crap I am starting out with is making me REAL nervous. We better roll smart up in this wasteland or we is gonna bet DEALT WITH!

Will helped me make my character after last Saturday’s Eclipse Phase game. It is very quick and easy. I look forward to a nice level of roleplaying and dread the downside of micromanaging my equipment EVERY time I use it that’s inherent in this system. But I know Will and I am sure that fun will be had. He knows a good story when he sees it. And he’s had time aplenty to create this tale of adventure and peril in the broken wasteland.

Hey Will, I am sending a guy who contacted me your way. he is new to the area and looking for a game. I advised him that since we have ten players we are kind of full-up right now. I am hoping to recruit more to your awesome GAMMA WORLD campaign so that we can launch this baby!!! His Obsidian Portal name is Alex G , I believe.

I'm sorry, but we no longer support this web browser. Please upgrade your browser or install Chrome or Firefox to enjoy the full functionality of this site.